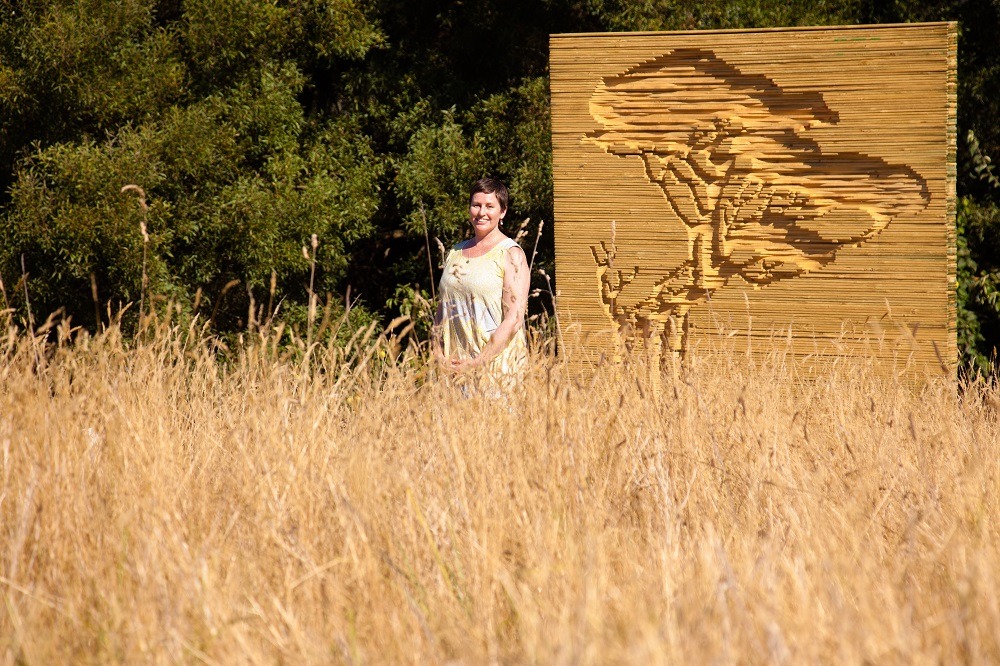 On Sunday 24th February 2019, the Mitchell family were joined by fellow judging panellists, artists and guests on a picture-perfect Red Hill day for the announcement of the Montalto Sculpture Prize 2019: ‘Moonah’ by Kylie Stillman.

‘Moonah’ is a free-standing stack of hand-cut fence paling panels, an imposing work that continues Kylie’s preference for everyday materials and follows her use of books and papers to form the objects into which she carves.

These often enigmatic ‘blocks’ have a presence in themselves, and in this case, the stack of panels form on one side a solid and impenetrable wall and on the other side reveal the negative form of a coastal Moonah tree, a dramatic ‘tortured wind-formed’ silhouette familiar to the area.

In a style familiar to her practice, the form is removed from the block, and it is the resultant shadow lines and revealed textures that create the pretence of a tree, that is in fact, not there at all. This absence of the tree and the scale of the block of material is not accidental. It is a lyrical prompt for the viewer to reconsider the origins of the matter we use to assemble our constructed world.

This year’s judges were John Mitchell (owner and founder of Montalto), Peter Williams (the architect behind Montalto’s iconic buildings, Williams Boag Architects),  Phillip Doggett-Williams (artist and educator), Kelly Gelatly (Director of the Ian Potter Museum at the University of Melbourne) and Lisa Byrne (Director of McClelland Sculpture Park) who deliberated over a record number of entries from some spectacular Australian artists.

“The winner offers ‘soft monumentalism’ that fits well with other works in the collection in the monumental mode. I like the idea of a ‘relief sculpture’ set into a soft material as opposed to massive stone as it has been done for thousands of years in the history of art and architecture. In most cases the relief was not part of the message of the relief, rather a vehicle to support the message usually of honour, victory over enemies, aggrandisement of emperor or deity and so on.

“This work shifts the conventional and expected use of the form to reflect on the techniques of our built environment. In this case, the material is part of the message. Approaching the precise large rectangular blade form built in natural material is engaging and the sculpted surface on the reverse a delight to encounter. The close oblique view is terrific and from a little more distance the relief becomes focused.

“The show has a richness this year and will engage the public in its diversity. The shortlist is a good one.” – Peter Williams

“In the sculpture of Kylie Stillman ‘Moonah’ we are confronted with a significant symbol of contemporary times in both art and ‘real life’. Barely a day goes by without some reference in the internet ether and beyond to ‘walls’ as both hurdles to transcend or as barriers to keep someone or something out. Transcendence and toxicity, hope and warning are at the core of meaning for this artwork. The interlacing of elements that manifest its towering form suggests respect for craft and materiality above monumentality. In this context, the work adds additional balance to a  diverse aesthetic comprising the collection at Montalto.” – Phillip Doggett-Williams.

“‘Moonah’ by Kylie Stillman is an exemplary sculpture that conceptually explores the key formalist principles of object-based sculpture whilst simultaneously referencing key contemporary themes of sustainability, materiality and location specificity. This is a work depicting a relief form of a local Indigenous plant: the Melaleuca lanceolata or Moonah tree, a highly sculptural tree in and of itself. The image is at one and the same time static, and elastic, stretched across one surface plane, and when viewed from numerous points appears to shift in its representation. A strong addition to the Montalto collection.” – Lisa Byrne.

‘Moonah’ will join the previous prize winners as part of the Montalto permanent collection with the other 29 shortlisted sculptures remaining on exhibition at Montalto for the next six months. While in situ, guests visiting Montalto can nominate their favourite sculpture for the People’s Choice Award.

Books and Ideas at Montalto – Podcasts

A series of thoughtful conversations about Australian literature – away from the city, at Montalto on the Mornington Peninsula. In…

Inside Out at Montalto: “Collage” workshop with Minna Gilligan [SOLD OUT]

Presented by the Ian Potter Museum of Art. Inside Out is a year-long program that invites you to shift your…

© 2021 Montalto Vineyard & Olive Grove.
CRU Support & eCommerce by CRU
Montalto acknowledges that we are located on the lands and waters of the Boon Wurrung / Bunurung people, members of the Kulin Nation.